This one has a spaceflight theme.
Posted by expat at 11:32 AM No comments:

It so happens that I'm reasonably proficient in the computer language perl, although I'm stuck at the perl 4 version while real pros all moved on to perl 5 many years ago. No matter, perl 4 does everything I need. Perl is now considered a bit dated but originally it was the #1 choice for interfacing web pages with binary data resident on the web server.

So I've created an online assist for acrostic compilation. Since the amount of data involved in a literary acrostic is trivial by comparison with most online databases, the program works very rapidly and all operations appear instantaneous. As I compile a puzzle clue word by clue word, the program keeps track of the statistics, tells me the number of words I have yet to invent and what their average length needs to be. Most important, it compares the letter frequencies in the unassigned letters with frequencies in standard English text. So at any point during the compile, I can see at a glance which letters I most need to use, and which I'm out of or almost out of. 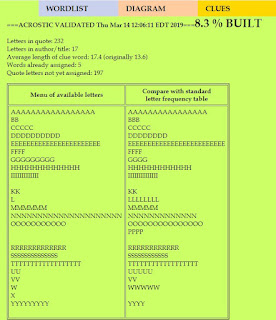 Part of my compile assist program: Too many Gs and Ys, too few Ls, no Ps

There's a trap there, actually. In writing the algorithm, I used the standard frequency tables in which E, T and A dominate with 12.2%, 9.1% and 8.12% . Obviously, that's because THE and A occur very often in normal text. However, in a set of clue words such as an acrostic needs, THE and A will occur far less frequently. So there is usually a surplus of those letters, and getting rid of all the Ts and Hs can be a problem. A and E are less of a problem since it's generally easy to find a place for vowels. In Acrostic #1 on this blog, "kitty litter" is an example of resolving a surplus of Ts.

The other thing my little program does for me is to assign the binding of word list letters to diagram letters automatically. Doing that the old-fashioned way is highly error-prone, believe me. In the early stages of compilation, there are usually many possible ways to bind a word list letter to a diagram letter, so I arranged for a random choice rather than a "first available" assignation.

Transforming the product of my program into a Word™ file, then a .pdf, is not automated, so I still have some manual work doing that part and rigorously proof-reading. But computerization has unquestionably made acrostic compilation faster and inherently more accurate.

"The function of music is to liberate in the soul those feelings that normally we keep locked up in the heart. The great composers of the past were able to do this, but the musicians of today are satisfied with four notes in a line you can sell at the street corner."

expat
I have some expertise in the fields of spaceflight, oenology, and certain outdoor games